Second console to bring to the bridge, and here and again, things I read are all so wrong. Where do these sites get data from? First off, the latch on the OEM NES is only 3.5 us and the clock is more like small latch blips of .5us pulses. Then to top it off, the NES polls in sets of two, not that it is a bad thing… This is a good idea, but first I heard of it. Let’s take a look at some footage… 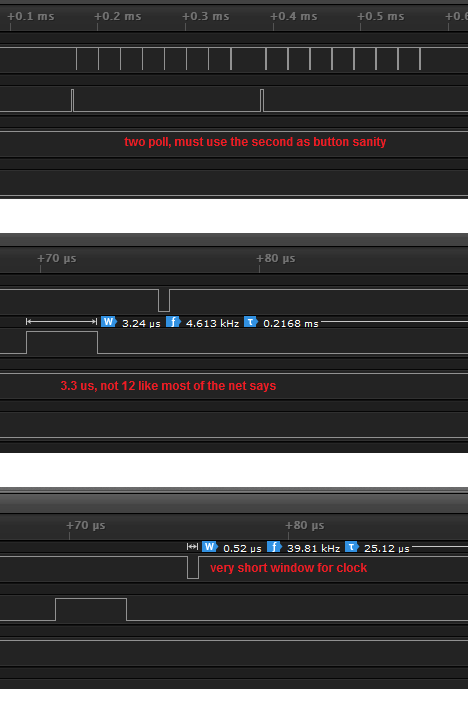 A bit of fun timing this one but didn’t need to use ASM, it all worked in C. The NES has no port fuses so a bit worried about that but the end design will have prevention from pulling too much power. As normal the poll rate is 16ms (tied to frame clear). Data shifted out as mentioned in most places and quite easy to emulate. All-in-all things went pretty smooth with this one and I’m hoping to use the same detection for snes (but looking for clock bits of 16 vs 8).

So two polls you say? Well first I have seen that on a console other then the DreamCast. Well, the DC didn’t actually poll twice but it did use check sum. I have seen this common in many gameport controller for computers but never a console. Though I think it is a good idea to check the payload sanity but not sure its that important for a simple shift register? I wonder if there is more to it?

So what next…may have to buy the original arkanoid game now to test vaus. Looks like the LLAPI will easily handle light gun support and work with most any other nes accessories.